High Quality Maps of the Limassol district of Cyprus 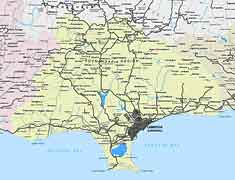 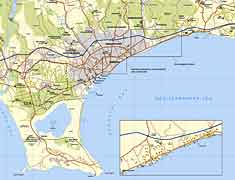 Map of the Limassol area 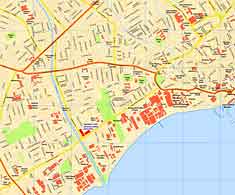 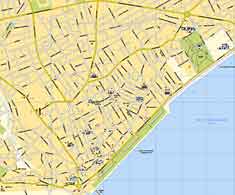 Limassol - Where The Gods Take Their Holidays

Limassol has gradually grown from a small town to a key commercial, port and holiday region, the legendary land where the gods take their holidays. As well as the many exclusive hotels and tourist attractions, the largest wineries in Cyprus are also located in Limassol and every September Limassol hosts a lively wine festival, an extravaganza where wine flows freely for everyone to enjoy, courtesy of the local wineries.

Cyprus' other top festival - the 10 day pre-Lenten Carnival, with fancy dress balls, parades and festivities - is also held in Limassol. There is also the Limassol Festival in summer and the ancient Drama Festival at Kourion.

Tourists say that the best time to visit the city is not during the hot and humid summer, but in the spring with temperatures around 24°C.

Limassol castle is located close to the old harbour and once served as defences, military headquarters and as a prison. Since 1986, the restored building has been home to a museum full of medieval artefacts. Other museums in Limassol also boast exhibits of archaeological treasures from the Neolithic and Chalcolithic periods, as well as artefacts from the Bronze and Iron Ages and the Graeco-Roman period.

About 14km west of Limassol on the road to Paphos is Kolossi Castle, a fine example of military architecture originally constructed in the 13th Century and subsequently rebuilt in the form it is now in the middle of the 15th Century. Kolossi Castle served first as the Grand Commandery of the Knights Templar, and after the fall of Acre in 1291, for some years as the headquarters of the Knights of the Order of St. John of Jerusalem.

Or you can pay a visit to the Museum of Folk Life and Folk Art and admire traditional costumes, pottery, jewellery and china.

Probably Cyprus' most important archaeological site is the ancient city of Kourion. The theatre was excavated in 1949-1950 and subsequently reconstructed and now each year in summer, the Kourion theatre hosts a number of plays and concerts.

Is it any wonder that Limassol is Cyprus' largest seaside resort?