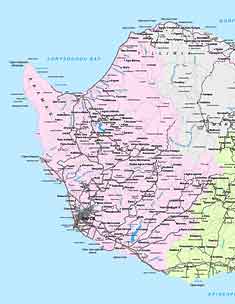 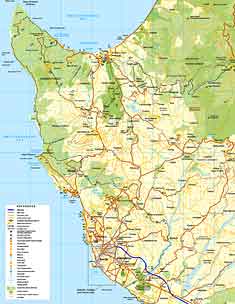 Road map of the Paphos area 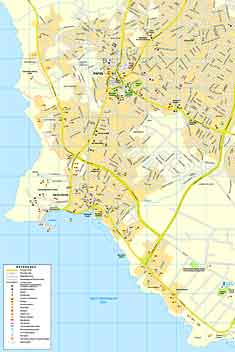 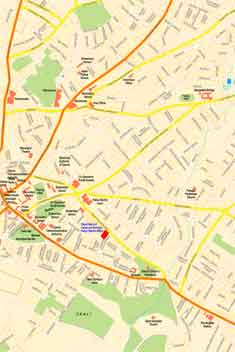 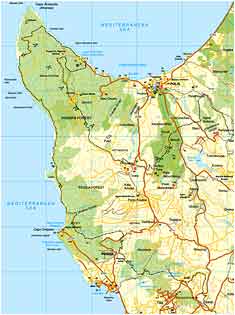 Road map of the Akamas peninsula 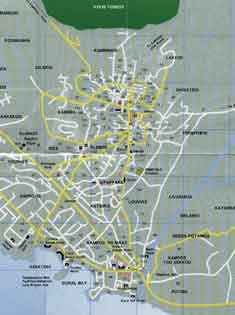 The charming harbour town of Paphos is on the west coast of Cyprus. History, myths and magic characterise Paphos, which was named after Aphrodite's daughter. The town is near the Petra tou Romiou rock where Aphrodite is said to have emerged in the sea foam. Those who swim around the rock three times are supposed to look forever young.

The swordfish which is served alongside the harbour in Paphos is certainly delicious. Try it at the Deep Blue restaurant in Pafias Aphrodite's Street (Kato Paphos). If you'd rather have a moussaka, check out the Palm Grove restaurant in the Intercoral Shopping Centre (on the corner of Hippopotamus).

Fancy a drink after your meal? Cleos Cocktail Disco Bar in Georgia Court, Coral Bay is renowned for its high-class and service. Also in Georgia Court is Kikko's Pub, a cocktail bar with karaoke and good fun several evenings a week; three large screens at Kikko's show sports events.

The Tombs of the Kings, mosaics and Paphos Castle are just some of the fantastic monuments and museums which adorn the town and for this reason Paphos is included in UNESCO's official list of the world's cultural and natural treasures.

A Traveller's History of Cyprus

Transport systems and accessibility is good and in the surrounding countryside there is so much to do and to see. Once you have exhausted the water sports at Latsi, there is the Tsada Golf Course just 25km from Polis.

The real lure of the area however is the Akamas Peninsula National Park, with its magnificent views, stunning gorges and abundant nature trails. Here the range of flora and fauna is overwhelming. Hiking and cycling trails are also set out and steeped in mythical legends. Within the peninsula you can also find the famous Baths of Aphrodite where, according to legend, the goddess Aphrodite used to bathe in the pool of the nearby natural grotto shaded by a fig tree.

For a detailed guide containing everything that one would want to know about Cyprus, we recommend the DK Eyewitness Cyprus Travel Guide

which is full of maps and beautiful photographs of every area of the island.